16. Digital civic skills are a key tool for defending democracy

How to harness the power of the web to support and renew democracy?

Digitalisation and the platforms and networks it enables have rapidly revolutionised the way we produce, acquire, disseminate and use information. With the development of technology, the arena of the public sphere has become much more complex and difficult to navigate than before. Whereas the traditional mass media used to be the gatekeepers of the public sphere, with at least in principle a great deal of influence over what and how social debate took place, they have now been joined and sometimes overtaken by a myriad of interlocking networks, some visible and some not.

Since the invention of the printing press, the technological revolution in communication has led to major changes in power relations. This shift in power is happening now with the internet and social media. Recent years have shown that what happens in the digital world has very concrete practical consequences. Indeed, in ten years we have come a long way from the early 2010s ‘techno-utopia’ of the Twitter revolutions and the Arab Spring. Later followed the Brexit vote in the UK, the takeover of the US Capitol and the proliferation of disinformation campaigns, to ‘techno-pessimism’ and the so-called information wars.

The rapid changes in the media landscape seen in recent decades have given rise to a plethora of new ways of influencing society and new forms of digital power. This has blurred the boundaries between decision-maker and citizen, influencer and influenced, and sender and receiver of messages. In recent years, Sitra’s megatrend list (1), among others, has referred to this phenomenon as the rise of relational power – networks and interaction will be increasingly significant in the future. The phenomenon is complex, and one can rightly see both threats and opportunities in it. For instance, a troll spreading confusion through disinformation on social media uses network power in the same way as an active citizen organising online help for people fleeing war.

The same is true at the systemic level: digitalisation and various forms of network-enabled power can accelerate the development of society in a democratic or undemocratic direction. For example, in its report The Global State of Democracy: Building Resilience in a Pandemic Era (2), published at the end of 2021, the Stockholm-based International Institute for Democracy and Electoral Assistance (IDEA) (3) estimates that the covid pandemic widened the gap between democratic and non-democratic systems. For autocratic regimes, the pandemic provided a reason and a means to strengthen control over citizens. On the other hand, democratic regimes took a digital risk, for example to enable parliaments to function or elections to be held in emergency situations. 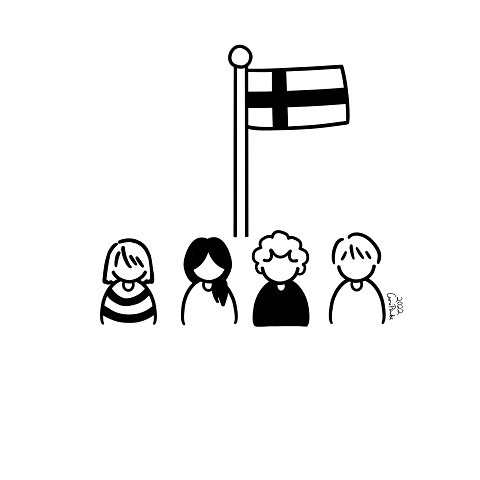 From a global perspective, IDEA’s message is in line with that of numerous other democracy reports published in recent years: the lifeblood of democracy in the world has continued to shrink in recent years. Finland and other Nordic countries are not immune to this development. Here too, for example, online harassment and intimidation have been shown to reduce people’s willingness to participate in public debate or to take a public stand as an expert on sensitive issues. Or to stand for election.

In a survey Well Said campaign (4) commissioned by Yle, the Finnish Broadcasting Company  in 2021, 63% of Finns felt that the culture of public debate had taken a turn for the worse, and that public debate was not seen as inviting everyone to participate. Trust in democracy and in other people is also being eroded by new and non-transparent ways of influencing based on data and algorithms. Already in 2018, a Eurobarometer survey (5) found that 83% of Europeans considered disinformation a threat to democracy, 63% of young Europeans encountered fake news more than once a week and 51% of Europeans believed they had been exposed to disinformation online. There is no reason to believe that these phenomena have diminished in importance since then.

Broad participation as a resource for democracy

In spring 2022, Sitra launched a four-year project called Digital power and democracy (6), which aims to increase understanding of the nature of networked, digital power and find ways to harness that power - the power of the web - to reform democracy. The core tension that the Digital power and democracy project addresses is that our everyday lives have moved to digital environments faster than the structures and practices that traditionally sustain our democratic social order. This, in turn, leads to a discrepancy between policy rhetoric and approaches and our everyday experience.

Lowering existing barriers to social participation is therefore a key means of defending democracy. As noted, in digital environments, such barriers have been identified in various surveys and studies, both in Finland and worldwide. Disinformation, confusing content, cyberbullying and the polarising nature of social media platforms’ algorithms impede meaningful public debate. Also linked to the same cluster of problems is the lack of transparency in the collection and use of data described in the previous article.

These obstacles pose a different threat to democracy than, say, military force or traditional cyber-attacks, against which various defences and ‘walls’ can be built. In the case of information warfare, on the other hand, the battle is over issues such as what is true and what we can trust. This question is at the heart of democracy, which is based on a sufficiently shared understanding of reality among different people and population groups, as well as on a desire for truth, i.e. the desire to know what is true and the ability to form an opinion on the basis of the information available.

Critical digital information literacy and, more broadly, digital civilisation are key to this. The ability to form opinions based on information is a prerequisite for participation in society. Social participation is important for both the individual and the democratic system, otherwise the human being, the main driving force of democracy and the ultimate purpose of the whole system, will remain a bystander. It is therefore important that the defense of democracy is not based solely on the construction of various physical or digital walls or the filtering of media content. That is when we run the risk of losing the very values we are trying to defend.

Jukka Vahti works as a project director in Sitra’s project Digipower and Democracy, which is part of Sitra’s Democracy and Participation theme.  In his work, he focuses in particular on the challenges to democracy posed by the rapidly changing media environment, social media and dis- and misinformation, and on increasing understanding of the societal significance of data and digital power. Jukka was co-author of the report “On the trail of digital power - How data can be used to influence decision-makers and govern the world”. Jukka was also co-author of Sitra’s report Media-mediated social influence - The transformation and the future, published in January 2021.