A Russian-language video circulating on social media falsely claims that Russia has moved Iskander missiles towards Finland. Several tabloids and news sites made a big story about the video.

On Sunday 15th of May, a Russian-language video began circulating on social media showing a Russian military convoy on a motorway. The video was filmed from a car driving past the column. The driver of the vehicle is speaking in the video:

“As soon as the Finnish President announced that they would join NATO, a whole division of Iskander troops, seven in total, a division, started moving towards Vyborg. It seems that a new military unit will be established in or around Vyborg. The equipment is new, with Ural trucks leading the way. So, Finns, get ready to join NATO.” 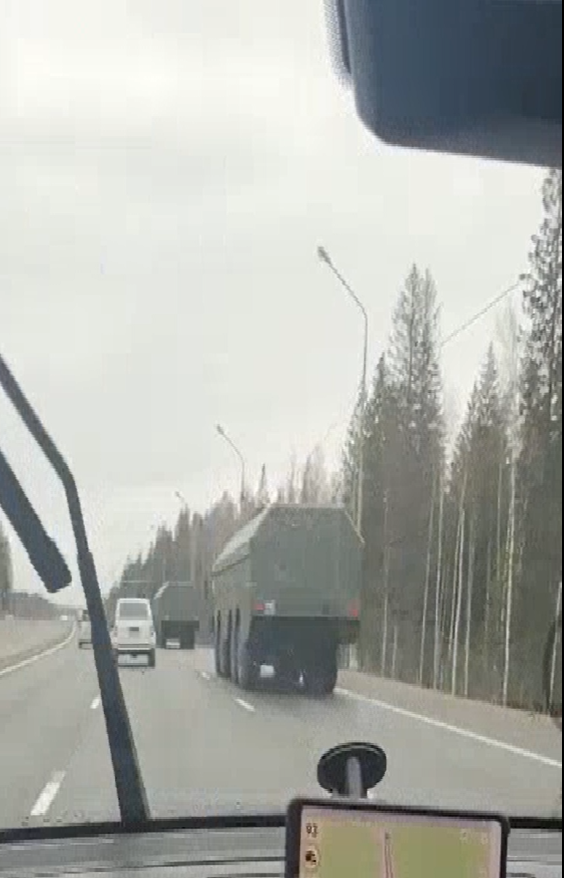 The video has been shared in Finland at least on Facebook and Twitter, but it has also been widely distributed worldwide via Youtube and Telegram channels. The next day, major British tabloids, The Sun, and Mirror, gave the video a big coverage.

The Sun headlined: “On the brink of war. Russia moves ‘nuclear missiles’ to Finland’s border in chilling threat over country’s NATO bid”. A couple of hours later, its rival Mirror reported in its online version that ‘Vladimir Putin has begun moving nuclear-capable missiles to Finland’s border in response to a NATO bid’. 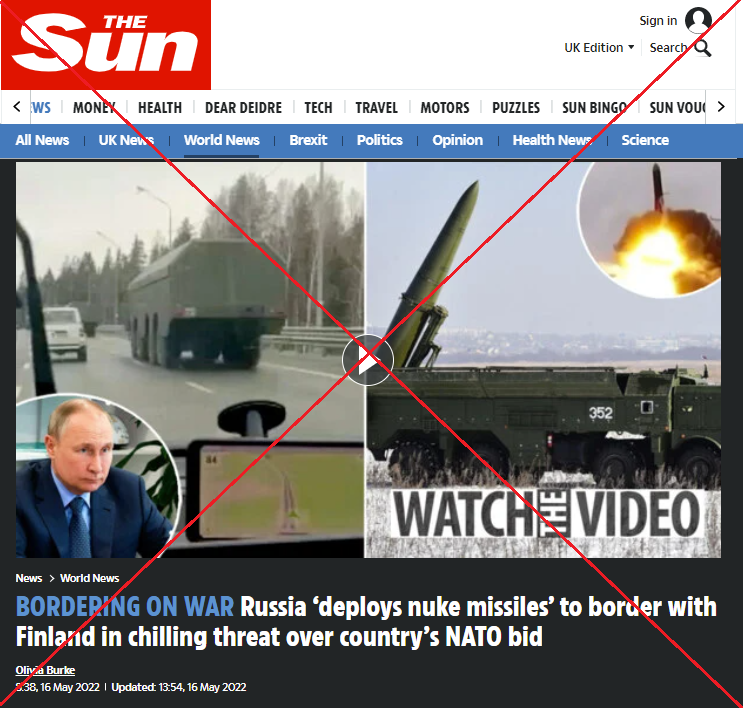 A tick has been added to the screenshot taken from The Sun website.

The claims made in the video and the news reports based on it are incorrect. Faktabaari has received a confirmation from the Finnish National Defence University (MPKK) that the equipment shown in the video is not related to the short-range Iskander ballistic missile system. It is the K-300P Bastion-P mobile coastal defence missile system, NATO identification code SS-C-5 Stooge. According to MPKK experts, there is nothing unusual about the deployment of the coastal defence missiles, which is part of normal training activities in the Leningrad region around St Petersburg and in the Bay of Vyborg.

The same conclusion was reached earlier by Petri Mäkelä, a blogger on security policy, who tweeted about the video: “Not Iskanders, Bastion. Operate often in the region”. A similar video sparked a debate in Finland in April. At the time, the video showed Bastion missile launchers in the Tienhaara area near the Finnish border.

Petri Mäkelä and Antti Eskelinen have located the new video shootage on the E18 motorway north of St Petersburg. The video shows six missile launchers passing an automatic weight and size control station (весогабаритного контроля) for trucks on the motorway. One anti-ship missile battery has four launchers, so there is either one or possibly two batteries on the move - a significantly smaller force than a division. 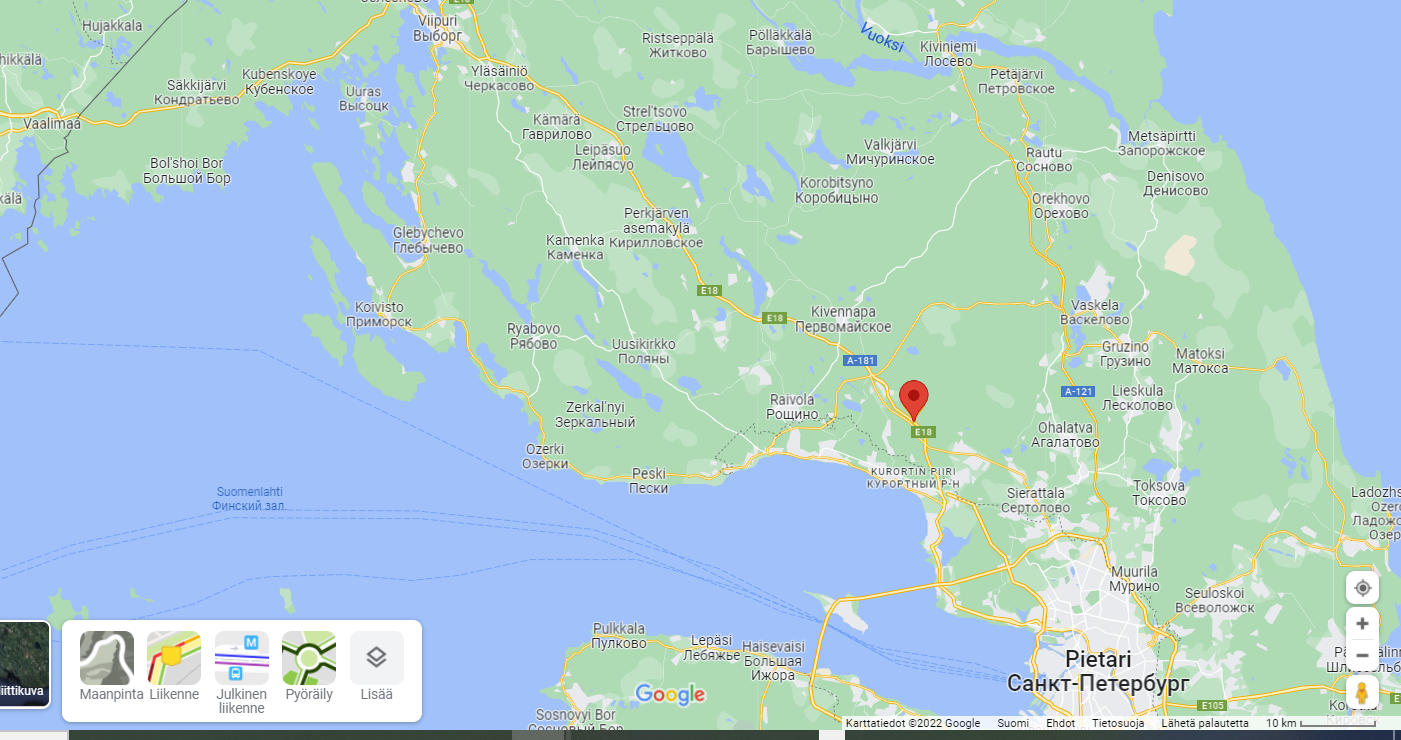 The Bastion column in the video was on the motorway north of St Petersburg at a point marked on Google Maps. 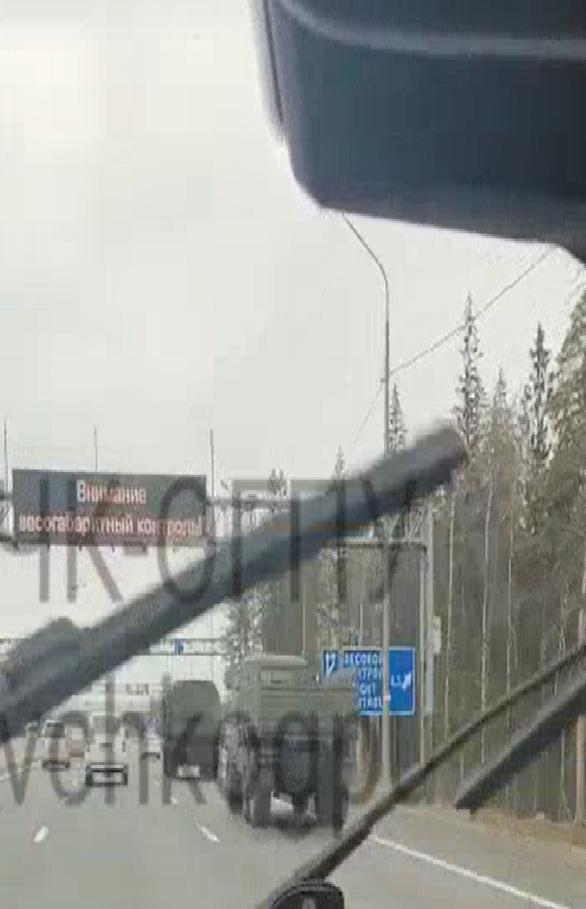 The video is filmed on the motorway and shows the same automatic monitoring station for the weight and size of heavy traffic as in the Google Maps image.

According to the MPKK, the Bastion-P missile system is intended primarily to engage a target the size of an aircraft carrier group, such as a US carrier strike group (CSG). “Using the Bastion-P on lesser targets would be a misuse of an expensive system,” MPKK said in a response to Faktabaari.

“In addition to one aircraft carrier, the US CSG group includes at least one cruiser, two to three destroyers, one to two attack submarines, one supply tanker, 70 combat aircraft and approximately 7,500 sailors and naval aviators.”

Aircraft carrier groups are deployed in the oceans and do not normally operate in the Baltic Sea. On the other hand, Russia is reported to have used anti-ship missiles in Ukraine also on land targets, as its missile stockpiles are depleting.

Moving the Bastion-P system in a spectacular manner is not necessarily a coincidence immediately after the Finnish President Sauli Niinistö and the Government’s Foreign and Security Policy Committee confirmed the decision to apply for NATO membership.

In addition to the timing, the pre-cut narrative of the Russian-language video suggests an attempt of information influence. The speaker knows the number of vehicles in the column even before he drives past them and guesses that a new “Iskander Division” is being established in the Vyborg region.

Petri Mäkelä notes that it is relatively easy to distinguish the Bastion launcher from the Iskanders. “The easiest way to recognise a Bastion is the longer rear axle overhang and the smooth sides,” he says. “The Iskander is shorter at the rear, and the sides of the launchers have stiffening lugs.” 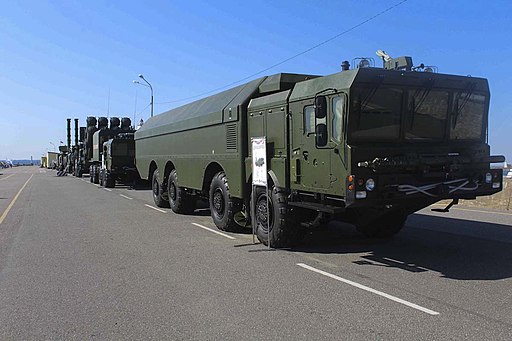 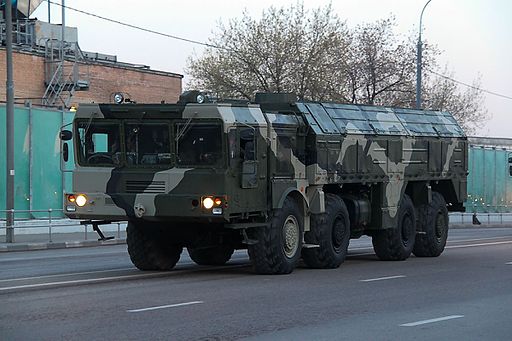 The fact-check was originally published on 19 May in Finnish. The English version
has been updated with the names of several news sites that circulate a similar
story based on the Russian video.